When an athlete gets injured, they will often ask: What is my injury? What do I need to do? Why is it important for me to do this?

However, the most important question the athlete will ask and the answer the coach will want to know is; ‘How long will it take for me to return to sport?’

For the athlete, the initial goal will be returning to sport in the shortest time possible and the secondary goal will be to maintain the pre-injury performance level. For the coach, success will be defined as the player’s performance on the pitch.

They have got to take into account the performance level (fitness and ball-skills) the player will return at and the psychological well-being of the player on returning from particular injuries (ACL, hamstring injury). This can include fear of re-injury, reduced confidence on certain movements or drills, fear of not returning to pre-injury level and fear of losing starting place.

In order to nullify the risk of these occurring, a coordinated collaboration with the strength and conditioning coaches, doctor, massage therapist and coaching staff is needed. Everything the athlete hears should be unambiguous with a well-explained pathway to return to play.

The expected return date should be uniform among everyone and potential risks as mentioned above, should be discussed among the backroom staff.

In a recent publication in British Journal of Sports Medicine by Claire Ardern from Aspetar Qatar, she addressed return to sport under 3 categories:

The GAA Football Championship format is designed for medical and management teams to take risks in order win games at all costs. If a key player has trained hard for six months and the first championship game is a 50/50 battle, you will do almost everything to make sure he is ready for that game.

However if the match is not seen as important as the next potential match, the team must weigh up the benefits of having an 80% fit player (category 2 player) on the pitch when potentially he can be 100% (category 3) for the next game and at a much reduced chance of re-injury.

Although there is pressure in the Premier League and other sports to get players back in quick time, there is added pressure from the GAA because of the small number of matches.

Inter-county teams may only play between two and seven Championship games. At times, you can be working to get a six-week injury back in three weeks.

The manger and player must first know the medical team expectations for the return to play time. If an earlier deadline has to be met, all potential risks for early return should be stated early.

Many times in the past, there has been times where calculated risks have had to be taken. It’s not just physiological assessment of the player’s ability to withstand tissue stresses, it’s a calculation of fitness levels, the upcoming opponent and game intensity as well as some luck. There has never been a scenario where a player is clearly unable for action as they have to undergo a thorough fitness test both on and off pitch to clear them first.

It’s true to say the only people that really know what is going on with player’s injuries is within the team itself. Many supporters and media can speculate, but they rarely get it 100% correct. Whether this is the correct approach remains to be seen.

I’ve followed Hawthorn quite closely since visiting the club in 2014. They’re a fascinating club with a remarkable record in a very competitive league. They have won the last three AFL Grand Finals – and made final of the last four – and are leading the standings of the current season. 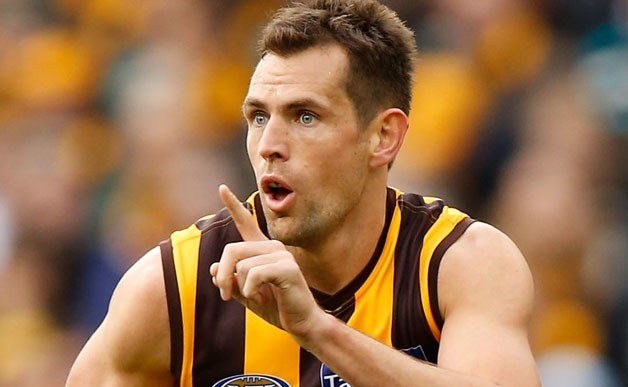 Luke Hodge (pictured above) has been Hawthorn’s captain and talisman over the past number of years. He is a hugely important player for them.

He suffered a broken arm and had knee surgery in the early rounds of the current season and missed large parts of the first half of the season. Hodge returned to play last week after completing a ‘mini pre-season’ in mid-season to prepare him for the rigours of the second half of the season.

Hodge was obviously very keen to get back a number of weeks ago. He said: “I’m still trying to say next week, but I can understand where they’re coming from. I think the idea is to get another two and a half weeks of training into the body and go for Port Adelaide. I’m very keen.”

“He was pretty keen to play but we’ve been holding him back just to make sure that when he does play, he can make the biggest contribution possible – in different circumstances maybe (he could have played), but he’s played very little footy for the first half of the year.”

Alastair Clarkson has evaluated the potential risk of re-injury from the low workload he’s had, the pressure on the player to come back into the team and immediately perform. He prefers Hodge to return at category 3 rather than category 2. It’s often a very difficult decision to take and it’s obviously made on a game to game basis rather than one size fits all approach.

“The easy part is to select them when they’re available sometimes, the hard part is to do what’s right for (Hodge) and the club, and we think in this instance it’s best he does this little bit of a preseason and get himself right for the second half of the year,” he said.

I’ve been in a fortunate position with Donegal over the past few years in that there was always excellent communication between management, player and medical team. Decisions on return to play were sometimes made at the last minute but it was always backed up with rationale decision making.

If the player, medial team and management were not in unanimous agreement, it was unlikely to happen. What is also important is that the players I’ve worked with have been excellent in rehabilitation.

Cristiano Ronaldo was recently commended in the Spanish media for getting up at 4am and using an ice-bath (which he has at his home) for rehab from a hamstring injury. He is of course an exceptional professional but it also wasn’t unusual for Donegal players to go over and beyond of what was the norm in order to return safely from injury.

There are no upcoming events.